What are you teaching us!!?!

If you caught The Mentalist on it's special night and time, tonight, you would have caught Cho dumping his drug stash. The toilet did not have a stall around it, which I can accept, maybe this is the toilet they take criminals to and we can't have criminals dumping incriminating evidence. This leads me to the worst thing I have seen on TV in a while, Cho could have easily used his foot to flush, but instead touched the filthy criminal toilet with his hand and then didn't wash! EEHHH!

Other than that, there really hasn't been anything exciting on.
Posted by T.V. PARTY! at 10:03 PM No comments:

I know, it has been an insanely long time since my last post... but honestly, I haven't tried any exciting beers lately and the summer re-run season is upon us...

BUT!
Duquesne, The Prince of Pilseners, is finally available in the superior form of can! Yes, I said it, cans are better than bottles. Realize it! You never know how much light might have reached your bottle, contaminating your beer and giving you that horrible skunk smell and flavor. When drinking from the superior can format, you essentially have your own tiny keg, and everyone agrees that draft beer is better. So, Cans>Bottles. It's that simple....

Remember, when you have to pick-up a case of beer for that weekend camping trip, or family cook-out, or maybe a day at the park, or just sitting around getting drunk...nothing will do you better than The Prince of Pils! It's the perfect summer beer. While an ice cold Weiss might sound nice, the Price of Pils will give you the chills... or something.. whatever, I should get a free case of beer for this...   but at only $16.99 for a 30-pack of 12 oz cans (or you could waste that same $16.99 for 24-12 oz bottles) I'm not going to complain, it's one of the best decent beer deals going! 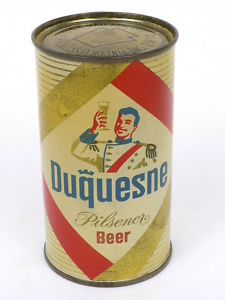 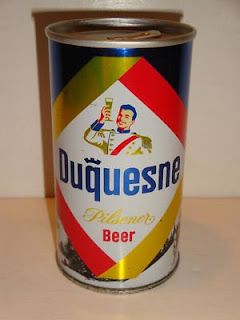 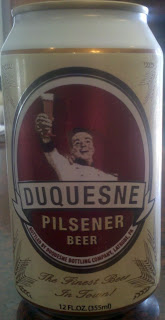 I wish they'd bring back the old school one at top left, just so we'd all have to carry can openers
Also, check out this link
http://duquesnebeer.com/2011/04/the-chugger-bottle/
I found it while searching for pictures of the newest Duquesne beer can style. I highly doubt they did this on purpose and love the PR spin.
Posted by T.V. PARTY! at 11:09 PM 1 comment:

no one pays attention to you...

Look Chuck, I understand what you're going through, it looks like no one is paying attention to you, but there are a lot of people that really care. Just because I'm not at your "big game" on Monday night doesn't mean I don't watch the replay online...

Yeah, so, I don't think I have ever watched Chuck live, except that one time I talked about it in the past when How I Met Your Mother was a repeat.. However, I have seen every episode (and sat through NBC and Hulu's online commercials.)  Somewhere in the middle of this season, it felt like everything was getting slow. That might have been caused by the fact that I at one point I was watching like five episodes a day, so it might have been slow at other times but didn't feel that way. Either way, the Chuck vs. Agent X episode was pretty intense. It was chock-full of quality story, and with two episodes left I'm excited to see how they wrap it up. The fact that the final episode of the season is titled Chuck vs The Cliffhanger isn't helpful, considering we might not ever know how it ends. There is still a large chance that Kabletown won't bring them back...
Posted by T.V. PARTY! at 4:38 PM No comments:

Now that spring is here, seasonal winter beers should be completely off the shelves, distributors should be almost out of spring specials, and summer beers might actually be on the shelves; I haven't checked lately. Instead of making rounds to the local beer distributors, I've decided to spend some time checking out the shelves of House of 1000 Beers. With old stock that doesn't ever seem to go bad, it's like time doesn't touch this place.

I liked it more when House of 1000 Beers didn't try to have class, and they were called 6 & Save. Now that they are House...all I can think of is this: 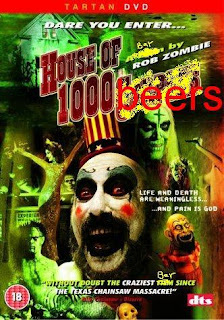 Either way, this place still has good deals. Six packs to go equal about the same price you'd pay per beer in a case. Some of their stock can get a little old, but if you ignore the fluorescent light coolers and go for the room temperature, dark shelves and cool it when you get home, then you'll be fine. I have never walked into this place and thought it was hot; I'd bet that is it always between 60-68 degrees. While not perfect cellaring temperatures, it's close enough. If you must have a cold beer as soon as possible, then sit in their "tap room" where they have over 30 beers on draft. Again, the draft beer can get a little old too, but the chances of it getting skunked are very slim. I've never had a skunked draft from them and have never paid more than $5 for a pint.

For all of you frugal beer drinkers that don't want to suffer through a case of Coors, House of 1000 Corpse Beers has you covered here too. Right near the entrance they have a shelf of bargain beers - stuff getting old that needs to move out now. You can score 12 oz bottles and cans of pretty decent stuff for $1 and find things that you didn't think existed, like 8% alc/vol blackberry flavored Sparks (judge me if you will, but I am totally going back for it).

I have been pretty proud of past finds at this place, like a one year old bottle of Delirium Tremens. Well I think I might have found the holy grail this time...

They had about eight 750mL bottles of Left Hand Brewing Company's Widdershins, an oak aged American barleywine style ale rated at 10% alc/vol and dated 2007, in the back corner of the top of the bargain shelf, listed at $4 each. I got two because I only had a few bucks on me, but I pretty much have to go back this weekend, and if no one beats me to it, I might just buy them all. When else do you get the chance to buy a good beer, that is already 4 years aged - in near perfect condition - for $4!? I'm probably getting ahead of myself, and I'll have to drink a bottle before I jump the gun and buy them all, but this really seems like a killer find.
Posted by T.V. PARTY! at 11:31 PM 1 comment:

I totally forgot to post these pictures before Friday, as evidence that my group actually met and worked on our research paper..


to anyone that reads this blog for the enjoyment of my rantings, feel free to ignore these pictures, I wasn't drinking or watching TV when they were taken...

However, if you were ever a fan of My Name Is Earl, you'll appreciate this first one... I totally didn't do that on purpose 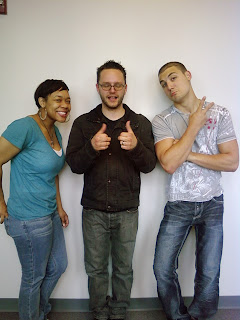 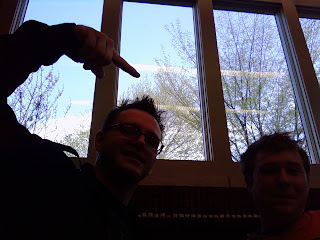 For the last week, while thinking about this blog, I was under the impression that it was the last one that I would be required to write. I was trying to decide if I would continue writing it, since I only have a couple followers and have no idea if it actually gets read. Eventually I decided that I would keep doing it. I will probably take more of an informal approach. I’d complain a lot more about specific things that happen in episodes. I’d give quick reviews of beer that I really liked, maybe even just for myself, so I’d remember how good it was in the future. Maybe throw in some quick notes about a cool bar. Nothing major, just somewhere I can complain about or praise things. I’ll probably expand my platform a bit as well. For example, I drink beer every year at the Pittsburgh Vintage Grand Prix, so I’ll talk about that. I love the Grand Prix and it’s BYOB, so I love the beer. Never having been exposed to any critique over it, I don’t know how good this blog actually is. But either way, writing it has been fun, and the stress of trying to crank out some material that is actually palatable before 11:59 pm on a Friday will go away, making this whole process easier. Once I finally looked at the syllabus I realized I am still required to write another blog after this one…so to stick with the current theme, I am happy to announce NBC has picked up Community for another season, and the last two episodes of the current season both have the words paintball in them. So, if you have never watched Community, watch these last two episodes. The first time Community did a paintball episode it was season one’s Modern Warfare, directed by Justin Lin, the director of The Fast and the Furious: Tokyo Drift, Fast and Furious, and the newest Fast Five (not that his pedigree is a good or bad thing, I just think it worth mentioning). It was one of the best episodes of Community, rivaling their Halloween zombie episode. I don’t know who the director of these next paintball episodes is going to be, but they were special ordered as add-ons. Usually add-ons scare me; NBC hadn’t yet announced that Community was renewed when they ordered them, pointing to season-ending game changers. I am thinking that these will be great, series-ending quality episodes, with the added bonus that we’ll get more next season.
Posted by T.V. PARTY! at 9:41 PM No comments:

and there is nothing on TV.

Sometimes I wish my blog didn't have a theme because there hasn't been much going on lately. For the last couple of weeks, it felt like every show has been a repeat. As much as I love spring and summer, the nights definitely get boring when there is nothing on TV. At least the last couple of weeks would have a sprinkling of new episodes throughout the mix, but for the most part, it was all repeats and basketball. I don't really enjoy March Madness, although, I did watch Pitt lose to Butler, but the foul shot after foul shot ending was more completely ridiculous than enjoyable. I rejoiced when I checked the TVGuide and saw that NBC was finally giving us an all-new Thursday Comedy Night Done Right - All Night. The rehashed version of Curb Your Enthusiasm starring Paul Reiser had a couple laughs and even featured Curb star Larry David "giving it his blessing," but it's not funny enough and I'm not a fan of straight-up ripping off another show; it's a weak move. Other than that, NBC totally delivered. I had planned to review a bottle of Brewery Ommegang's Hennepin Farmhouse Saison. Honestly, I can't give a review...while breaking a lot of beer advocacy rules by putting the bottle in my freezer to cool it down faster, I forgot about it, and it sat frozen for 2 days. Luckily the cork allowed some pressure to escape and the glass didn't break. I let it thaw slowly, and it tasted excellent, but from what I've read, anytime you over-cool a beer you mute a lot of the flavors. I'll have to buy this one again and see if that is true.
Posted by T.V. PARTY! at 10:39 PM No comments: